The Creation
“The Creation” is a series of stained glass windows produced for St Louis Bertrand Church in 1962. This project is the subject of a book of the same title. Click the image above to read the book…..

The architect Richard Schubert, from Oakland, California, asked me to meet him in his office. That was November 1962. He had just finished building the church of St. Louis Bertrand and commented, ‘from the inside it looks like a factory’. He said, ‘see what you can do, but whatever it is it has to be completed by March’, four months ahead!

In two weeks I came back to him with a plan to make stained glass windows all around the church; paint ‘al fresco’ the fourteen stations of the cross; make two large sculptures cast in concrete and a baptismal font carved in Carrara marble. Schubert told me to go ahead with it all.

I started to work without delay. I went to Los Gatos, the closest stained glass workshop to San Jose where I had my studio, with my project for the windows. These were: a façade window measuring some 80 sq. m., 16 lanced windows measuring over 60 sq. m., a Baptismal window of 4 sq. m., and 4 smaller windows for a chapel. The director of the workshop, an Irishman with a very traditional approach to glass windows, said that he would not have anything to do with it but he would put one of his craftsmen to help me do the work while the rest of the teem had vacations. I painted black scribbles on thousands of rectangular pieces of cathedral glass, which were fired twice and leaded, framed with metal and installed in the church.

While the installation of the windows was taking place I started painting the stations of the cross, the cartoons for which I had been developing during the evenings. The painting was done directly on wet mortar of sand and lime as is proper for the fresco technique.  This part of the project is described separately. Also, I had sent to Pietrasanta, Italy, a 3-D model of the baptismal font to be reproduced in Carrara marble, which arrived to the church in time for the opening ceremony.

The opening ceremony was in the late afternoon while the sun was setting, and all the windows, which were made in various tones of gold colour, were dramatically brilliant giving a magical glow and ‘punto’ to the organ and choral singing taking place at the time. Afterwards, the comments of priests, nons and the community in general were of satisfaction and approval.

Unfortunately this was not the end of the experience concerning that commission.

The 16 lancet stained glass windows that I made In 1962, titled ‘The Creation’, have been replaced by new ones made by somebody else sometime between 1973, when I left California, and 1992, when I visited the church again.

I discovered this change when, during my visit, rang the church to ask when would be the best time to go to make photographs of the windows and the fresco paintings. The person who answered the call , the rector, said after a silence that my windows had been damaged some years back by children throwing stones from the school yard and had to be replaced. He was reluctant to let me in and made all sorts of very dry and dismissive comments. I went nevertheless to see what had happened. The priest was very defensive, nervous and a bit unpleasant. I said that to replace all the windows must have been much more expensive than to repair the damaged ones. Furthermore, I said, why didn’t he install some protection on the outside of the windows when the damage started to happen, as is done in old churches in Europe, which would have, again, been much cheaper. It was obvious to me -and to my wife and her mother who were with me at the time- that the priest didn’t like the windows. After all, the new ones had not been damaged with stones during the years that they had been there!

The long window covering the facade of the building is still there. This one Is more vulnerable than the others because it is facing the street and it is in a poor area of the city, but this window has a theme (is representative rather than abstract as the replaced ones were) and I am sure this fact somehow protected the large window from the rector’s unscrupulous action. The same is true of the small window, 2.5 x 2.5 m. of the baptistry at the entrance of the church.

At the time of my visit to the church I was very depressed and annoyed. I had considered those windows (the 16 destroyed) my best work. The one remaining was not at the same level of quality. Details of this one have been reproduced in a survey of glass windows in the book “Stained Glass, music for the eye” The Scrimshaw Press, 1976, by Robert and Jill Hill Hans Halberstadt. I suspect that the others had already been replaced by then, otherwise I am sure that the destroyed windows would have been selected in preference to the one (details) reproduced.

The fresco paintings, the 14 stations of the cross, are keeping the same colour as originally. The only deterioration is in some very fine and long cracks running through some of them and this, I guess, is the result of the earthquake in the area some years earlier. Again it is surprising that these paintings, being all of them at some 1.6 m. from the floor, have not been damaged with scratches or graffiti… 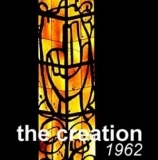 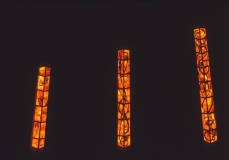 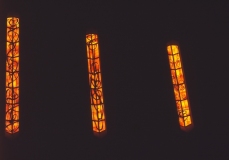 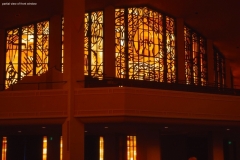 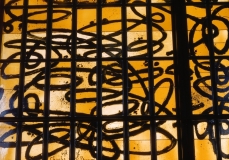 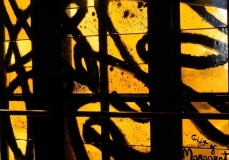