It was the winter of l 955 when I was there, walking early every morning from the pension where I was staying to the chapel, a few km distance. I remember with shivers the mattress in my bed, in the room of the pension; it was so cold and humid. . I use to go completely dressed into it and little by little, as I got warmer, take off one by one my garments. I kept them inside the bed with me so that in the morning I could put them on warm, while under the blankets (which by the way were extremely heavy) before venturing out. A large white enameled metal jar with icy water, probably brought up from a cistern, and a washbasin, were the only things available in the room for washing myself. The floor had no covering of any kind, just exposed wide old wooden planks. A small window, a naked bulb hanging from the ceiling, a heavy waxed and shiny wardrobe and a large oval mirror were the remaining features of the room. It was very squalid, as I see it looking back today. At the time, being young, fit and enthusiastic – and completely absorbed by the project I was working with – I took all those inconveniences as part of the exciting experience.

Downstairs I spent usually a few minutes to have a breakfast of the previous night’s leftovers (probably fried beans with chorizo and vegetables) and a cup of milk with coffee before taking to the road toward the chapel. I had the keys for the heavy front door. Nobody around. I organized tools and materials for a full day’s session which consisted in mixing dry sand with lime into a mortar, plastering the section of the wall that I figured I could paint in four or five hours, mixing pigments and extending on the floor the cartoons; an outline study of the image to be painted. Then I used to sit in front of it to roll a cigarette and think for a while…The chapel is dedicated to St. James. The theme for the mural is, on the left side wall, St. James as a fisherman. At the center is the entrance to the cathedral of Santiago de Compostela; the Portal de la Gloria. Immediately above runs horizontally the Milky Way or Via Lactea in Spanish, which is also called the Camino de Santiago, the way to St. James, because the pilgrims from all over Europe followed the stars to go to the cathedral, the place where it is believed the saint is buried. On both sides of the entrance to the cathedral I painted pilgrims. To the right end of the wall there is a scene of the saint’s death. On the upper left and right ends of the mural there are angels with the Bota Fumeiros.

The Bota Fumeiros is a silver censer of more than one meter in height that actually hangs from the middle of Santiago de Compostela cathedral’s dome. At important festivities it requires four men to lower it down to the floor level by means of the pulley it hangs from, to fill it up with incense. Then they pull from the rope – which is divided in four strings, one for each man- to raise it a little above the tallest person and, by rhythmic and synchronized movements they swing it from side to side, first slowly but then faster and faster until it zooms smoking away from one end of the transept to the other, almost reaching the ceiling. It is hair-raising to see that heavy thing crossing by at the speed of a comet, while the organ of the cathedral plays its deepest and loudest notes.

We were told that Catalina de Aragon, on her way to marry Henry VIII, stopped in Santiago. The Bota Fumeiros was used for the occasion and at one point it got lose and went through the end wall of the transept to the outside killing a number of pilgrims.

In the center of the mural and above the cathedral and pilgrims there is a symbol of the Trinity.

These photographs are from the apse of the chapel as it was when I finished the fresco painting. Many years later it was cleaned of every thing; paintings, sculpture and altar, by the Diputacio de Barcelona following a programme called ‘Programa de Restauracio Monumental’ . The reason is that the chapel is an early Romanesque building of national interest. Since mostly my fresco murals in Catatonia were made on walls of very old buildings, I assume that most of them have been removed by now, which is not a great loss. The sculpture is are from Fita, carved in wood and polychromed. It was made in the clinic’s room where he was staying after an accident. I worked on the carving to help him because he had broken his back and was not in the best of shape. 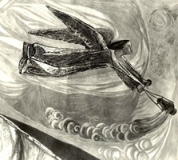 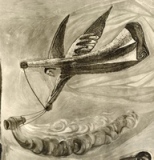 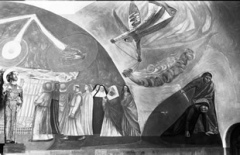 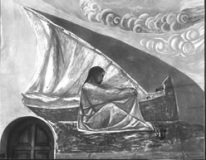