The mural measures 11.5 meters wide by 3.8 meters high. It consists of 295 pieces of ceramic in six different sizes placed side by side. For the concept of the mural I divided the total wall space available into a grid of squares of a convenient size-unit of 238 x 238 mm. and used the unit as base size to make the six ceramic prototypes used.

The most prominent pieces have a white glazed face, the others being left in natural fired colour. All the pieces were slab built and fired at 1250 degrees. The glazed pieces had an earlier ‘bisque’ firing with a white slip, and a glaze was applied before the second firing. The pieces were glued with epoxy resin to eight GRC panels and these were then bolted to eight metal structures. The completed panels, each weighing approximately 800 kg, were erected by crane and bolted into place.

The ceramic pieces were made and fired by Maffhew and Kate McLean.

The mural was finished in 1980 and had good reviews. It was considered by many to be fragile and exposed to vandalism and accidental damage, but I am pleased to say that nothing has happened to it in the last twenty five years. 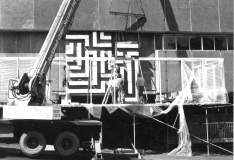 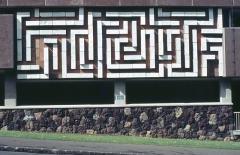