The exterior walls on one side of the building are white, black on the other. The fresco painting in the apse is 100 sq. meters; 14 meters long by 7.5 meters high at the center.

The architect was Josep Ferragut; a young person with a high social and professional profile. He was a good friend of Marian and mine. Ferragut commissioned me to do many murals and encouraged me to install a weaving factory to undertake several commissions for large tapestries. Shortly after buying three looms of considerable size he died – was murdered, in 1966.

The mural was technically a disaster. The mortar that covers the brick wall – as preliminary base support for fresco painting technique was to be made with a mixture of one third of lime and two thirds of clean river sand. Although this was emphasized to the contractor he decided that the sand from the beach nearby was good enough and used it without telling me. After I had finished one fourth of the mural I saw with horror large areas with green stuff growing on its surface, indicating that there was salt in the mixture of the mortar. The contractor confessed his wrong doing and efforts were made to correct the problem using chemicals specially prepared by a laboratory in Palma for treating the wall. For a few weeks it seem to work and I continued with the mural hoping for the best. By the time I finished the painting, though, the green matter started again to appear on different areas and I had to accept at that point that the work was utterly ruined. I made photographs for my files but without much enthusiasm. This was more than 40 years ago and I have not been there since. Maybe it has survived as I left it but, most likely, the mural has been destroyed. 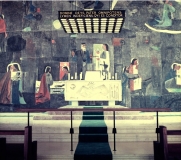 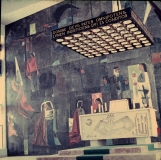 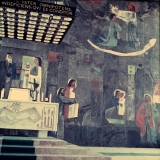 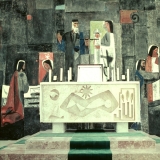 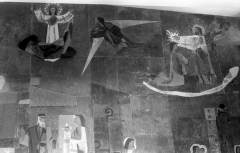 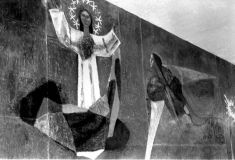 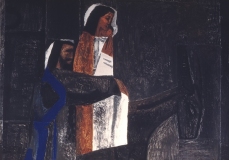 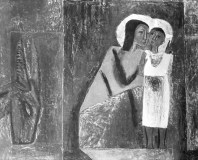 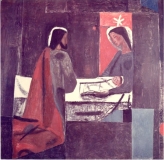