The Woodside fresco was my first commission on my arrival in the Bay Area with Marian and Jordi in November 1960. By then we had moved from San Francisco to San José; a town south of S.F.

I had had five solo exhibitions during those months. The most prominent one was at the San Francisco Museum of Modern Art with excellent reviews but no sales and this mural at Woodside was welcomed.

I taught part time at the California College of Arts and Crafts and during the following two years had exhibitions of large canvases in local galleries while completing commissions for frescoes, sculptures, a tapestry for a private collection, the ‘Creation’ glass windows and the projects for the Madera mosaics, which took us back to Europe in 1964. 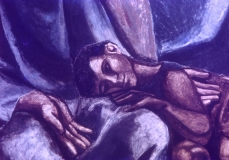