In 1963 I was commissioned to make a mosaic for the Church of Madera. The mosaic was made following my project and supervision by the Favret Mosaic in Pietrasanta, Carrara, northern Italy, where I went from Majorca with some frequency to view the progress of the work and suggest changes. In 1965 I returned to California for the installation of the finished mosaic which was contracted to be done by a local firm.

During the transportation of the many boxes containing the mosaic from Italy to California on a cargo ship, the glue that holds the mosaic pieces to the thick paper forming the work was eaten up by worms, whereupon more than half of the mosaic’s little pieces got loose. We realized the disaster as soon as the boxes were opened in Madera and saw thousands upon thousands of pieces piled up and paper without mosaic on it. Considering that the main mosaic was going to cover a surface of 3600 square feet (400 sq. m.), the enormity of the problem was obvious. I was the only one at that point responsible for the work because the Favret Mosaic had been paid in full. Two years work of an experienced group of craftsmen had been almost totally destroyed. There was no other alternative than to undertake myself the making of what was missing, and it took me several months of painful work to finish it and complete the installation.

This prolonged time of work meant that the scaffolds had to be there covering the full area. No functions, such as the Mass or weddings, could take place, with the consequent loss of income for the parish. At one point I was told that the payments still due to me would be stopped immediately. I have to say here that, while the mosaic was being executed in Pietrasanta, the priest the Very Reverend Mario Buttini, O.S.J. that had approved enthusiastically the projects for the mosaic, had been replaced by a new rector and a new administrative committee, and they wanted something more traditional on the church.

I did my best to finish the mosaic following my projects but to do it properly I’d have had to spend a few more months, which was out of the question. The quality of the completed work was not to my satisfaction. I wanted to remake several areas but I was told that the scaffolding was to be dismantled right then and I, furthermore, was not going to be paid. What to do? I decided that the solution regarding the payments would be to take off the head section of the Christ’s figure and keep it until full payment had been received, and so I did. They paid promptly, the head was installed again and the scaffolding taken down.

The solution did not improve the mosaic and I’ve been unhappy since then. I have no photographs, which I regret, of the entire apse; only one in colour from a detail of the left wall and some black and white photos taken from the project. 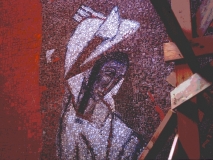 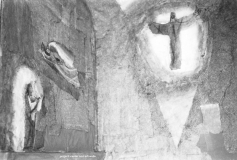 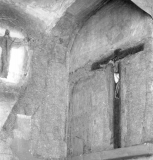