In January 1964 and upon completion of my work at St. Louis Bertrand Church, I was comissioned to make 12 frescoes for the chapel’s side altars of the new Holy Redeemer Monastery.

The walls for the chapel were under construction at the time and I was planning to go to Spain with my family in one month’s time. The only possible way to do the work was to paint the 12 frescoes in my studio on small walls and let the client transport them to the site when needed, after my departure.

Each wall had to be at least two inches thick and made of sand and lime in accordance with the traditional technique of fresco. Considering the size of the paintings they were going to be extremely heavy; difficult to handle and fragile for transportation and installation. Furthermore I was not going to be available to repair any possible scratch or damage inflicted on them while being moved around.

Regardless of the difficulties involved it was decided to go ahead. I had a very large studio in Los Gatos, an old carriage house, and was able to complete the work without problems.

The frescoes were moved to the chapel a month after my departure to Spain and it was several months later, on my return to California, when I was to see the paintings installed. I made some photographs but not of all the frescoes and probably will never again have the chance to have photos of the rest. I’ve been told by the Holy Redeemer order here in Auckland that the seminary in Oakland has been moved. They didn’t know to where. 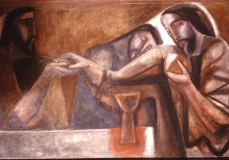 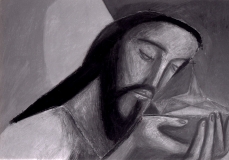 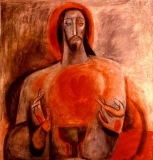 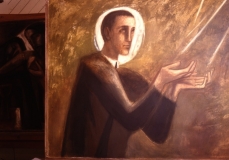 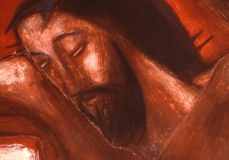